My last post covered the history of political campaign music used by Republicans, related controversies, and what Mitt Romney’s musical selections said about his campaign. If you haven’t read that yet, I recommend checking it out here. This is the followup to that post, where I’ll pick apart music used by Democrats and how Barack Obama’s playlist summarizes his reelection campaign.

Although Presidential campaign songs are a tradition as old as the office of the Presidency itself, when candidates started using popular music instead of songs composed specifically for their purposes, it became a complex process with some unintended consequences. Because many people will know the song they hear after a campaign speech, they may have preconceptions and already associate it with something else. Often, campaigns try to use this to their benefit by using a positive association, but sometimes these pre-existing associations backfire (see the Hillary Clinton example below). Other times, the musicians themselves make a musical selection controversial by publicly opposing the politician using it.

Democrats have generally had it pretty easy over the last few decades when using campaign songs and avoiding scandals. Republicans, on the other hand, have had quite a few issues. Perhaps that’s because many people in the music industry are friendlier to left-leaning politicians and Democratic politicians know which country stars to avoid. That’s not to say that Democrats haven’t had any musical challenges. During the 2008 primary, Hillary Clinton had a contest on her campaign website to select the main song. The winning number was “You and I” by Celine Dion. They soon stopped using that song, however, when it came to light it was already part of another marketing campaign:

Whoops. When selecting your Presidential campaign song, you don’t want something that will make people think about the flag of another country. Also in 2008, Sam Moore of the Stax duo Sam and Dave sent a cease and desist letter to the Obama campaign for using the song “Hold On, I’m Coming.” Moore said he wasn’t supporting any candidate and did not want people to think he was endorsing Obama.

But generally in the 2008 campaign, musicians seemed to be lining up to support Obama through their music, from will.i.am’s anthemic “Yes We Can” to the controversial lyrics by Ludacris. Indie rock band The National was very supportive of Obama in 2008, even writing the song “Mr. November,” and they’ve supported him again this year by performing at some of his rallies. Jay-Z and Beyoncé have held fundraisers for the President and numerous musicians have voiced their support again, although the musical enthusiasm has waned a bit compared to 2008. But don’t worry, Rastafarian and aspiring reggae icon Snoop Lion is still on board:

Like other candidates, President Obama is using music in his campaign to express a personal and political identity people can relate to and will be attracted to. A major part of this musically-constructed identity that Obama used in 2008 was lifted from the music of Motown. In addition to songs by other Motown stars, the song most closely identified with his campaign, which he is using again this year, is Stevie Wonder’s “Signed, Sealed, Delivered (I’m Yours).” For the first black candidate on a major party ticket, the use of Motown made perfect sense. Berry Gordy, the founder of Motown Records, was very conscious of race, and one of his primary goals was to have a label where all songs were written, performed, recorded, and published by African Americans. At the same time, he wanted to sell music to the broadest audience possible so he minimized the issue of race by going so far as to not include pictures of the singers on early Motown records. The songs avoided controversial issues that could be conceived as “racial” and instead addressed universal themes that any young listener could relate to. This made Berry Gordy and Motown very successful, and in crafting “The Sound of Young America” he made music that baby boomers of all colors still identify with. Likewise, Barack Obama wanted to reach the broadest audience possible, and to win he needed many of those same boomers who grew up with Diana Ross, the Temptations, the Four Tops, and Stevie Wonder.

I recently saw Michelle Obama speak in Tallahassee, and before she took the stage, Al Green’s “Let’s Stay Together” played over the loudspeakers. The song is from a different label after Motown’s heyday that represents a more mature (and sexualized) brand of soul music, but it fits Obama’s 2012 campaign well for various reasons. He’s asking us, the electorate, to stay together. Plus, many people started to associate this song with Obama personally after he famously sang a few lines earlier this year. It reminds us that he’s cool under pressure (one of the qualities voters most admire in him), and that he’s a better singer than Mitt Romney. As Al Green’s sultry voice filled the Civic Center, a friend asked, “Are the Obamas trying to seduce us?” Yes. It seems that they are. Being attracted to a candidate’s policies isn’t always enough. You also have to like him, and maybe even like like him.

After Mrs. Obama was done speaking, the speakers blared “We Take Care of Our Own” by Bruce Springsteen. This is Obama’s main campaign song this election and was the first song played after the President’s speech at the Democratic Convention in Charlotte. I wouldn’t be surprised if Springsteen wrote this with the election in mind, because it sets up the dichotomy between a cold, Randian individualism as represented by the Republicans and the idea that in hard times Americans help each other out and succeed together as espoused by the Democrats. Using it so prominently is also a way of sticking it to New Jersey’s Republican Governor Chris Christie, who references Springsteen regularly, and reminds us of the popular musician’s actual political leanings.

Like in my previous post, I’m going to dig into the campaign’s Spotify playlist. You can find Obama’s 2012 Playlist here and I also have it embedded below. It includes 41 songs, and the description says, “The official 2012 playlist features picks by the campaign staff – including a few of President Obama’s favorites.” Based on some of these selections, I wouldn’t be surprised if some of the campaign staff came from the Pitchfork offices down the street from Obama HQ because there are some cool, recent, and somewhat obscure songs included.

Many of the songs I’ve already talked about are included, and although “Signed, Sealed, Delivered (I’m Yours)” is the only actual Motown song on the list, there are a number of songs that evoke Motown in one way or another. The first song on the playlist is Raphael Saadiq’s “Keep Marchin'” and similar to how Sharon Jones has revived and updated the Stax sound for contemporary audiences, Saadiq has done the same for R&B in a Motown style. The playlist also includes Jennifer Hudson’s rendition of “Love You Do” from the soundtrack to Dreamgirls, which was loosely based on the true story of Diana Ross and the Supremes. And while 1964’s “Keep on Pushing” by The Impressions came out of Chicago instead of Detroit, the Motown influences on Curtis Mayfield’s songwriting can be clearly heard.

The following chart breaks down this playlist into some fairly broad genres, and like my analysis of Romney’s playlist I chose oldies (pop/rock songs from the 1970s and before), country/western, and contemporary rock/pop. I had to add an “other” category here to include the one rap and two Spanish-language selections on Obama’s playlist. Here’s how it breaks down:

As a reminder, Romney had 19 songs total: 9 Oldies (47%), 8 country/western songs (42%), and 2 contemporary rock/pop songs (11%). You can see that Obama’s playlist divides very differently. It is dominated by contemporary rock/pop songs, which include many different styles from indie rock to R&B and folk rock. The oldies are largely dominated by soul and R&B songs from the 1960s and 70s, but there is some variety with James Taylor and REO Speedwagon in there.

Obama’s playlist also includes a not insignificant number of country songs, and he has used country music in conjunction with some of his most prominent speeches. After he spoke at both the 2008 and 2012 Democratic Conventions, Brooks & Dunn’s “Only in America” was one of the songs loudly and clearly heard in the venue and on television. From a political perspective, this makes a lot of sense. While the country is fairly evenly divided, current polling shows rural voters swinging significantly towards Romney. Through the use of these songs, the campaign shows that it is still trying to appeal to these voters and is not ignoring them (and implicitly that it will not ignore them after the election either). The majority of country songs on Obama’s playlist are fairly recent. It includes two songs by Darius Rucker (Hootie sans Blowfish), two songs by Sugarland, as well as the Zac Brown Band, Dierks Bentley, and the oldest country song being Montgomery Gentry’s “My Town” from 2002. While these are fairly new country songs, they generally still have a preoccupation with an unassuming, simple domestic life laced with nostalgia. Therefore, I argue that these songs are in place to reassure and comfort voters who miss the “good old days,” because overall this playlist gives a message about rejecting nostalgia for the past and marching forward.

Like in my analysis of Mitt Romney’s playlist, I used 1994 as the cutoff for “new” vs. “old” music because 1994 is the year that the youngest voters in this election were born. As a reminder, 12 of the 19 songs on Romney’s playlist qualify as old (63%) while 7 of them were new (37%), and 5 of those were country songs. Again we see a sharp difference in these two playlists. 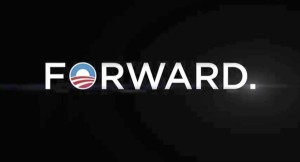 Obama’s playlist reflects his campaign’s slogan: Forward. Mitt Romney’s playlist is about nostalgia and looking back. While Obama’s staff included songs that can reach out to all sorts of constituencies and demographics, the overall message is clear. The America found in the aging imagination of the baby boomers is gone, and trying to regain the past is a futile effort. Like this playlist, the United States has a diversity of ethnicities, languages, sexualities, and perspectives, and it won’t become homogenous anytime soon. AgesandAges encapsulate this idea on the playlist with their song “No Nostalgia” as they sing:

No, nothing wrong
And no looking back

With his campaign’s musical selections, Barack Obama is asking us to “Stand Up”/“Raise Up” and “Roll with the Changes” to help him “Keep Marchin'”/“Keep on Pushing.” If we do our part and keep moving forward, a better America will be “Signed, Sealed, Delivered.” Now please excuse me as I “Whip My Hair” back and forth for the land that I love.