Cartoon Network, launched in 1992, has played with the union of new, hip music and animation since the network began creating original content. When the Adult Swim programming block started in 2001, new music that would appeal to the network’s late night fans gained greater prominence in creating an overall aesthetic for the new network. Following the formation of Williams Street Records in 2007, Adult Swim has released numerous albums related to their shows while also producing new music in a variety of genres. This has recently culminated with the annual Adult Swim Singles Program and the release of Killer Mike’s critically acclaimed album R.A.P. Music earlier this year.

The direct precursor of Adult Swim, Space Ghost Coast to Coast, was the first original series produced by Cartoon Network. It began airing late at night on weekends in 1994. It’s clear from the early episodes of the show that the crew at Ghost Planet Industries (which would later become Williams Street Productions) had an eclectic passion for music that they were able to blend with Space Ghost’s offbeat style. For the show’s theme song they used a piece by guitarist Sonny Sharrock who straddles the line between free jazz and psychedelic rock. Sharrock released an album of songs composed for the series, and after his sudden death a 1996 episode entitled “Sharrock” with guest Thurston Moore featured extended, unedited takes the guitarist had recorded for the show. Some of the other musicians who were guests on Space Ghost Coast to Coast included the Bee Gees, The Ramones, Schoolly D, Weird Al, Branford Marsalis, Alice Cooper, Michael Stipe, David Byrne, Donny Osmond, Matthew Sweet, Jonathan Richman, Method Man, Les Claypool, Ben Folds, Mike Watt, James Hetfield, Kirk Hammett, Dave Grohl, John Popper, Beck, Jimmy Cliff, Jack Logan, Ice-T, Pavement, George Clinton, Rob Zombie, Pat Boone, Chuck D, Tony Bennett, Moby, Hanson, Captain & Tennille, Thom Yorke, and others that I probably missed. Two of my favorite episodes included the one in which Space Ghost marries a confused Björk and the one where there’s a gas leak in the studio while interviewing Busta Rhymes.

The practice of combining music with the Hannah-Barbara properties Cartoon Network owned began leaking into the earlier hours as well, largely in the form of the short Cartoon Network Groovies that would occasionally air during commercial breaks. Some of these used original music with new animation such as this classic that I remember all too well:

Others took old Hannah-Barbara footage and remixed it to make videos for new songs by alternative and indie bands like this rendition of Soul Coughing’s “Circles” from 1998:

When the Adult Swim network started in 2001 as a late night sister to Cartoon Network, its first four original shows (Sealab 2021, The Brak Show, Aqua Teen Hunger Force, and Harvey Birdman: Attorney at Law) were either spin-offs of Space Ghost Coast to Coast or were similar in their use of older Hannah-Barbara characters and footage. The creators at Williams Street brought the same musical interests they exhibited on Space Ghost to the fore in this much larger television playground. Some of their early original shows featured musicians or regular musical gags (I’m looking at you MC Chris) and many of the non-original shows they played, like Cowboy Bebop, were known for their music. However, the eclectic nature of Adult Swim’s music is most prominently featured not in any of their shows directly, but in the “bumps” they play during commercial breaks. These minimalist screens generally include a black screen with white text directed at the viewer. The music accompanying those screens rarely has vocals, but the genres range from world music, jazz, and progressive rock to experimental art music and hip-hop beats by producers like Madlib, Dangermouse, and J Dilla.

In 2005, producer Dangermouse and rapper MF Doom approached their mutual acquaintance and Cartoon Network employee Jason DeMarco (who ran the network’s Toonami block at the time) about making an album using samples from Cartoon Network. DeMarco then brought the idea to Mike Lazzo at Williams Street who agreed to finance it. The resulting album, Danger Doom’s The Mouse and the Mask, released on Epitaph Records was littered with Adult Swim samples and references, and it went on to become a critically acclaimed hit making numerous Top Albums of 2005 lists and even won the PLUG Independent Music Award for Best Hip-Hop Album that year. In an interview with The Hollywood Reporter, DeMarco explains how that led to the eventual creation of Williams Street Records in 2007:

So based on the success of [The Mouse and the Mask] we did another project with Stones Throw Records called Chrome Children that also did very well, and then the conversation turned internally to, “Well, if we can do this with other labels, we have the infrastructure, we’re a big company, why don’t we try starting our own label because we obviously will be doing more of this stuff?”

Since its formation, the label has released soundtracks to Adult Swim shows as well as original albums by the fictional bands from those shows. This year saw the release of the third Dethklok (from Metalocalypse) album, Dethalbum III. I think three albums and multiple tours is pretty good for a fictional band. Who says that just because they’re fictional, they can’t be real?

Williams Street Records has also released numerous albums not related to their shows directly. They first collaborated with El-P in 2007 when Adult Swim animators helped make the video for his song “Flyentology” and they then released a free-to-download album with artists from El-P’s label Definitive Jux entitled Definitive Swim. Listen and download it for free here. Also, if you’re not familiar with El-P, go track down a copy of the album Funcrusher Plus by his previous group Company Flow and watch this video. Right now. Do it.

In 2010, Williams Street Records started the Adult Swim Singles Program. In conjunction with Kia, Adult Swim released a new single each week for eight weeks. Each song had its own cover art and they initially had to be downloaded separately. Once all the songs were released, a ninth bonus song by Freddie Gibbs came out, and all nine songs could be downloaded together as an album. This was repeated again in the summer of 2011, and the 2012 Singles Program now only has a couple weeks left. This program is great because of the diverse genres and styles represented each year and also because many of these songs have not yet been released elsewhere. These artists are giving Adult Swim and Williams Street Records the rights to distribute their songs for free before anyone else. There’s already some great stuff up from this year, and the full list of participating artists includes Unknown Mortal Orchestra (6/18), The Hives (6/25), Wye Oak (7/2), Absu (7/9), The Field (7/16), Flying Lotus (7/23), Gauntlet Hair (7/30), Wavves (8/6), Com Truise (8/13), Yamantaka//Sonic Titan (8/20), Elite Gymnastics (8/27), an additional artist not yet announced (9/3), and a bonus track by Death Grips (9/10). You can find it here. 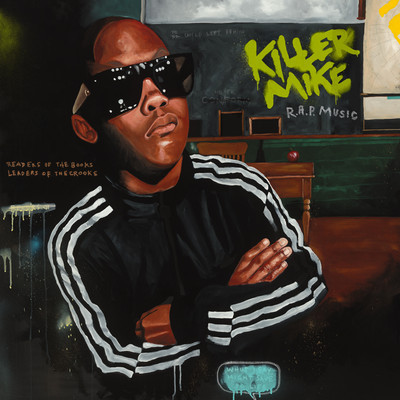 Williams Street Records’ biggest success to date came earlier this year with the release of Killer Mike’s album R.A.P. Music. Killer Mike is from Atlanta, which is also the home to Turner Broadcasting (and therefore Cartoon Network, Adult Swim, and Williams Street Records), and he first interacted with the Adult Swim crew when he contributed a track to the Aqua Teen Hunger Force movie soundtrack. A few years later he came back to Williams Street to have them release his sixth studio album despite their status as a small label unable to pay him what he would receive elsewhere. They were able to convince El-P to produce the full album despite El-Producto being busy working on his own record at the time. The R.A.P. in the album’s title stands for Rebellious African People, and the album’s lyrics have a strong political bent from beginning to end. Upon release, the record received rave reviews from magazines and music sites. Its critical success combined with exposure through Adult Swim has led to it being the biggest release from the record label to date. Here is the most recent video from the album:

To those of us who grew up with music videos, the confluence of popular music and cartoons seems natural. The prominence of music in Adult Swim and the many musicians who are drawn to it, however, can still seem surprising. Williams Street Records founder Jason DeMarco describes the connection many musicians have with Adult Swim this way:

Adult Swim appeals to anyone who stays up late at night and musicians stay up all hours. So when they come home from their show or off tour or are in their hotel and they get into their room at three or four in the morning, Adult Swim is on and it’s sort of their friend. No matter where they are in the country, they can turn the TV on and Adult Swim will be there greeting them every night.

For viewers and music fans, Adult Swim has a different appeal. Today MTV doesn’t play music videos, and easy access to music through the internet has greatly expanded most young listeners’ tastes beyond any one genre. When a viewer hears something they like even very briefly during a bump on Adult Swim, it’s easy to jump online and find out the name of the song and musician and be listening to the full track in minutes. The shows on Adult Swim are off-beat and quirky and often contain musical references, but the connections between Adult Swim and popular music go far beyond Black Dynamite fighting secret agent Elvis Presley and the thrashing guitar sounds of Dethklok in Metalocalypse. Go check out Williams Street Records on the Adult Swim page here to listen to songs, download tracks, and watch videos. I also want to remind my Tallahassee friends to be sure and check out the El-P and Killer Mike show Saturday night on FSU’s Union Green. I’m going to miss it because I’ll be at the beach, but I’ll be sure to squeeze in some R.A.P. Music while I’m there.

Here are a couple other recent Adult Swim musical collaborations I wanted to share. First, A Trampled by Turtles music video featuring the animated characters from Squidbillies:

And here’s a fun promo for the fourth season of Childrens Hospital that prominently features music from The Shins’ excellent album released earlier this year:

One thought on “Tunes and Toons: The Music of Adult Swim”